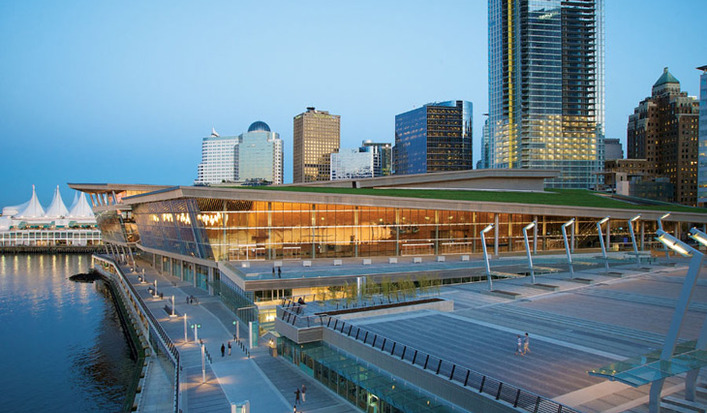 Built over land and water on some 1,000 piles, the Vancouver Convention Centre Expansion Project was completed in late 2008. In order to ensure that the expansion and existing facility are fully integrated, a glass-walled connector links the facilities, providing delegates with exceptional harbour views as well as a seamless transition.

The green roof is landscaped with more than 400,000 indigenous plants and grasses from the Gulf Islands, providing natural habitat to birds, insects (4 beehives on site) and small mammals. This unique ecosystem is planted over 12" of growing media. The green roof is designed to act as an insulator, projected to reduce summer heat gains by up to 95 percent and winter heat losses by up to 26 percent.

The building foundation is specifically designed to recreate a natural shoreline for marine life. An underwater habitat skirt or artificial reef is built into the building's foundation to provide a new habitat for barnacles, mussels, seaweed, starfish, crabs and various fish species. The architects collaborated with marine biologists to develop the restoration plans for 200 feet of shoreline and 1,500 feet of marine habitat. The five-tiered underwater structure looks like a set of bleachers, consisting of 76 concrete frames weighing more than 36,000 kilograms each. The structure creates tidal zones underneath the building that flush daily with the rise and fall of the tide.

Audio Tour of this building

This building is part of the City of Vancouver Green Building Audio Tour, a collection of audio recordings about Vancouver's greenest buildings. Each three-minute recording takes the listener on a virtual 'tour' of the building's green design features, guided by the architect or member of the design team. You can listen to them online, via podcast, or via your cell phone by calling 604-673-8150. The Vancouver Green Building Audio Tours were created through a partnership between City of Vancouver Sustainability Office and the Open Green Building Society.

To hear the audio guide for this building click on the player at the top of the left sidebar on this webpage, or dial 604-673-8150 and enter code 12.

Copy and paste this code into your blog, wiki or website: